Is banning one chemical enough? In many places, there has been a lot of focus on banning one or two "bad actor" chemicals. We see this most often with glyphosate or neonicotinoids. While we certainly don't advise the use of these chemicals, by banning or restricting the use of only certain pesticides, we leave the door open for what's come to be known as regrettable substitution.
Regrettable substitution is when one chemical is banned, only to be replaced with another chemical just as harmful, or potentially worse.

We have seen this happen over the years with many different products. An example of this is found with the chemical bisphenol-A (BPA). As consumer demand for BPA free products grew, the chemical compounds they were replaced with - BPS and BPF - have now been found to have similar health effects. Their use, and exposure to these chemicals is increasing.

This is also happening in communities where residents who are rightly concerned about the use of glyphosate or neonicotinoids, seek to have these chemicals banned. In some of the cases where this is successful, these chemicals are just replaced with another toxic pesticide.
​ 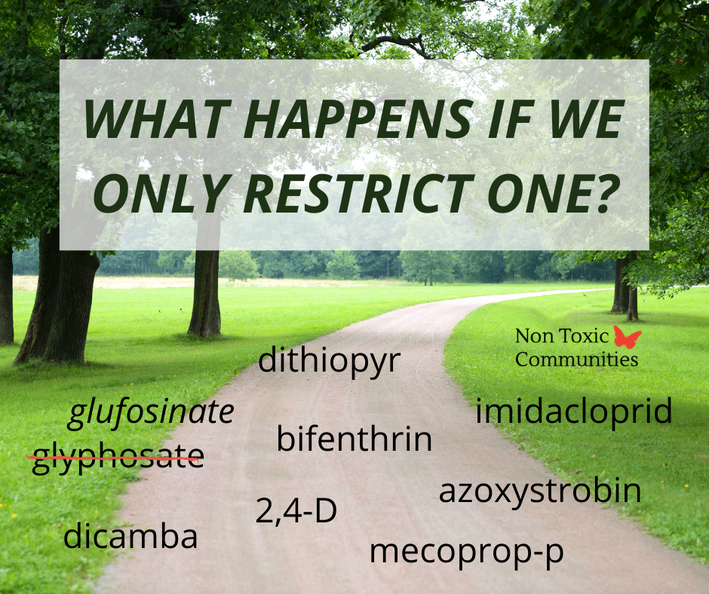 ​In one example, resident concerns caused the city to switch from glyphosate to another herbicide called diquat dibromide. In another example, locals worked hard to have glyphosate banned, only to have the city replace it with glufosinate and flumioxazin. This is clearly not what they had in mind when they started!

We need to be very cautious when we communicate with decision-makers that we are very clear about our intent. If we focus most of our time on Roundup or glyphosate, or banning one particular chemical, we run the very real risk of another chemical just as bad, or perhaps even worse being used instead. We may also end up with a product swap approach where organic approved products are swapped in but are not particularly effective and cost significantly more.

This is why Non Toxic Communities promotes a switch to organic landscaping - to close the door on regrettable substitution.

Organic land care practices are about so much more than switching one product for another. It is a comprehensive approach with standards to be followed. Organic landscaping prioritizes cultural, mechanical, and biological solutions before choosing a least toxic product as a last resort. Organic turf management is not about scheduled applications of organic fertilizers, insecticides, or herbicides. The focus is on the soil and its biological makeup. When you have healthy soil, you have healthy plants with less weed and pest pressure, reducing the need for products in the first place.

If we wish to stop the use of toxic pesticides in our communities, it’s of paramount importance to ask for the solution: an effective organic land care program that eliminates all toxic inputs and synthetic fertilizers.
​
See our Landscapes page to learn about organic land care.
​
more ARTICLES on regrettable substitution
In the absence of strong US government regulation, communities need to take a holistic approach to pesticide use

The problem is not glyphosate, or DDT, or BPA - we must challenge the entire system!
​
Unsafe at any Dose? Diagnosing Chemical Safety Failures, from DDT to BPA
​
Regrettable substitution: swapping the devil you know for the devil you don't

The commons principles for alternative assessment