​Addressing commonly heard objections to changing status quo landscaping methods
While it may feel like a commonsense approach for many of us to move away from using toxic pesticides in our cities, schools, and HOA’s - for others, making a change can be a difficult process. Resistance to implementing organic practices can have many different underpinnings. Myths are promoted by corporate interests to confuse people about their products and the alternatives available to replace them. Here, we respond to several frequently heard arguments against changing to landscaping and turf management that does not rely on toxic pesticides.


Organic has a long history of being a viable and effective method in agriculture and landscape management. When we purchase organic food at the grocery store we know what we are getting, because of certification and labeling requirements. When it comes to lawn care and turf management no such national certification or labeling yet exists. In the absence of widespread certification many companies market ‘organic’ turf programs that are nothing of the sort. Many times, these are what's called a product swap approach where conventional fertilizers and pesticides are swapped out for organic products. This approach is indeed ineffective and a recipe for failure.

A true organic program focuses on the soil and not on scheduled product applications. A soil based organic approach to caring for landscapes is a proven, and effective way to manage lawns, parks, and athletic fields. Many successful examples exist all over the United States. See our list of pesticide free zones and policies.

Myth: Organic is too expensive!


When implemented properly, a soil based organic turf management approach is proven to be not only cost-effective, but cost saving in the long term due to reduced inputs. 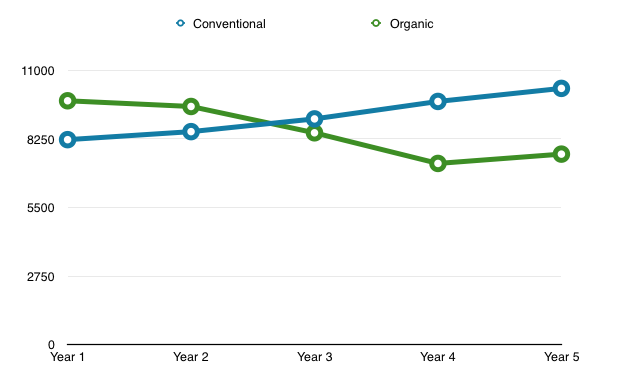 Source: A Cost Comparison of Conventional (Chemical) Turf Management and Natural (Organic) Turf Management for School Athletic Fields
Myth: We will be overrun with insects like mosquitoes, ticks and chiggers!


While insects occasionally do need to be managed, the majority of pesticide use in parks and turf areas are for cosmetic applications to kill dandelions, clover and other ‘weeds’. By far the most common application of insecticides on turf is for grub control, also a cosmetic issue. None of these plants or insects constitute a public health emergency.

In the event that control is needed for insects that can carry disease, there exist numerous effective strategies that employ least toxic methods and products that can be utilized in an organic program. Cultural, mechanical, and biological methods should be prioritized, with the least toxic chemical control being used only when these methods fail. An example of a least toxic chemical control would be a product made with botanical oils, designated as a minimum risk pesticide and exempt from EPA registration.


Believe it or not, this particular argument is used quite often as an objection to switching management practices in regards to weed control. What is being referred to is the acute toxicity of acetic acid versus the chemical glyphosate. Glyphosate is the active ingredient in Roundup and many other commercial herbicide products. Lethal dose 50 (LD 50), is the amount of an ingested substance that kills 50 percent of a test sample. This acute toxicity measurement refers only to how much it takes to cause death in one exposure. The concern that people have over toxic pesticides like Roundup being used in public spaces, is not that they will immediately die from walking through a park where a glyphosate based herbicide has been used. On the contrary, it is the long-term chronic effects on both human health and the environment behind why the public has begun to ask for safer alternatives to conventional weed and insect management.

Active ingredients in pesticide formulations are never used alone. They are combined with other ingredients called adjuvants, that help to make the active ingredient more effective. The LD50 or acute toxicity of these formulated commercial pesticide products are not typically being measured during the EPA registration process. It is inaccurate, if not downright deceptive, to compare vinegar or acetic acid to a single chemical component of a formulated herbicide product. Independent scientific tests have shown that the commercial formulations are much more toxic than the active ingredient alone.

Horticultural vinegar is an appropriate weed management tool in an organic program. It is designated as a least toxic chemical control. As with any pesticide product organic or otherwise, label directions need to be followed exactly. Since horticultural vinegar is an acid, appropriate protective equipment must be worn by the applicator. The trade off for this minor inconvenience, is that acetic acid breaks down into carbon dioxide and water in the environment, posing a negligible risk.

Each product being used needs to be assessed individually for all potential long-term health and environmental effects, not compared on the basis of acute toxicity alone.

Myth: The EPA wouldn't allow something on the market if it wasn't safe!


A very common misconception is that the EPA’s job is to decide which products are safe and which ones are not. The EPA estimates toxicity to a certain population of people against the economic benefits of allowing a product to be sold, in spite of that product’s toxicity. Additionally, it is most common that only individual “active” ingredients of products are required to be tested by the manufacturer - the EPA does not perform the testing. The entire formulations are not tested, nor are they tested in combination with other formulated products being used in the same landscape. Scientists have shown that combinations of pesticides can be far more dangerous. Furthermore, pesticide labels on containers reflect short term exposure concerns only (eg. eye and skin irritation, etc.), not potential long term affects such as cancer, neurological, or infertility issues.

“The…only entity testing the safety of the components is the company—and they have no incentive to show that their products are dangerous. It is a conflict of interest, and they are not protecting public health—that is the bottom line.” - Bruce Blumberg, professor at the University of California, Irvine (source)

​Testing of active ingredients is based on the outdated assumption that the lower the dose, the less biologically active a compound becomes. (See below image left) This is what's called a linear dose response. You may be familiar with the axiom, “the dose makes the poison.” However due to the growing scientific evidence on EDC's we know that this is an outmoded way of thinking.
​
In the past three decades, a new area of research has emerged in the field of endocrinology, studying the hormone mimicking effects of certain substances. These are known as endocrine disrupting chemicals, or EDC’s. These chemicals display what's known as a non-monotonic dose response. (See below image right)

Just like our bodies respond to hormones, EDC's can be active at very low doses while at the same time, higher doses may show different effects - this could be lesser, or greater, or a different response altogether. This type of dose response curve exhibited by EDC’s makes basing regulatory testing on an assumed linear dose response very dangerous.
The level of chemical exposure that are deemed acceptable by the EPA are not required to be tested. In the diagram above (right hand image), you can see that testing is done to identify the maximum tolerated dose, the lowest observed adverse affect level, and the no observed adverse effect level. The NOAEL is used to determine a reference dose (RfD). This RfD is determined by lowering the amount by a factor of 100 or 1000 times. It is believed that these levels are too low to cause any health problems and are therefore “safe”.

Regulatory agencies have been notoriously slow at recognizing the body of evidence showing low dose effects and non-monotonic dose responses. There exist a number of assays to test for EDCs, though there is still some disagreement as to whether these are the most sensitive or proper tests for these specific endpoints.

Scientists have collectively published data that show some 1,500 known chemicals exhibit characteristics associated with being an endocrine disruptor. The EPA program to identify and regulate EDCs is in its infancy.  EPA has published a list of 52 pesticides evaluated in Tier 1 tests.  Unfortunately there are also major disagreements between the US EPA endocrine disruptor Tier 1 test results and those published by scientists in the open peer reviewed literature. Furthermore, there are 80,000 chemicals in commerce in the U.S. and it could take centuries for regulatory bodies to screen them all for EDC activities.

Similarly, many other areas of regulatory testing are seriously lacking. Testing is not routinely being done for mixtures and cocktails of chemicals, including formulated products. Nor is the toxicity of pesticide metabolites, the chemicals they break down into, being examined. Developmental neurotoxicity is not taken into account, and neither are intergenerational effects.
​
As time passes new technical information enlightens us to exposure hazards with chemicals previously deemed acceptable. These chemicals include chlorpyrifos, atrazine, and now glyphosate that are either banned or have restricted use in the U.S. and/or other countries. Just like with tobacco, or asbestos which has not yet been banned, because something is regulated by the government it is not an assurance of its safety.
​
​
Click here for a printable PDF version of this article.